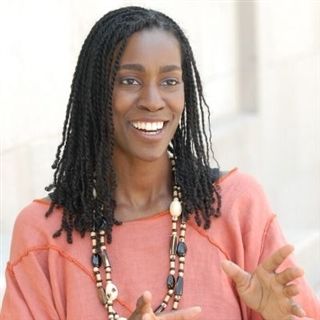 The FCS community was immersed in lively language last Thursday when storyteller Diane Macklin performed for both the Lower and Middle School. “I related to most of the stories she shared,” said 6th grader Nayla. Her classmate Anna observed that even if the stories didn’t match her own lived experience she learned so much from them, “I found it fascinating the way she spoke with a lot of passion and it made the stories so much more interesting the way she told them.”
Whether through providing a mirror or window for her listeners, Diane believes in "making a difference, one story at a time.” She performed for students at FCS several years ago and though she was virtual for this presentation, her storytelling was no less engaging. She began her career as a teacher but found that storytelling was her best way to serve as an educator. She currently performs at the Smithsonian, for the National Association of Black Storytellers, as a teaching artist for the Kennedy Center's Partnership Schools program, and at schools like ours. Diane’s performance was part of our month-long celebration of Black History and focused on themes from her own life. In both assemblies, Diane shared personal stories, rich with voices and lessons for everyone. For the Lower School performance, Diane shared a story about making succotash with her mother for the first time. Young Diane learned about mixing a variety of things to make something delicious, while sharing lessons learned from her mother. We also learned that the version of succotash that her mother always made came from both her African and Native American backgrounds. In Middle School, Diane told us a hair story - about when she was growing up in New York state, as one of the few Black families in her town. The story was full of humor and passion, as well as a rollercoaster of emotions. Some students came away from it affirmed and seen, while others learned something they may have not known before.
Diane closed her presentation for the middle school with a hope for all who attended. “I am so grateful to have had this time and to share stories with you. And I’m hoping that maybe someone listening today goes, ‘Huh, you know, I have a story about me and my hair.’ Or, ‘I have a story about being someplace and having someone be kind and someone not be kind.’ And that maybe you’ll share that story with someone else but also that you might go to the adults in your life and say, ‘Hey, where are our people from? Those ancestors that are a part of us, that maybe sacrificed so that the future would be better.’”
Back
Located in College Park, MD, Friends Community School is a progressive Quaker K-8 day school, founded on the belief that every child is a valued member of our community. We offer a challenging curriculum imbued with strong values of equality, integrity, community, environmental stewardship, simplicity and peaceful conflict resolution, rooted in our Quaker heritage.
Friends Community School
5901 Westchester Park Drive
College Park, Maryland 20740
301-441-2100