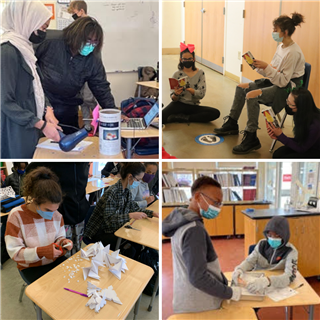 Learning was a full-body experience in Middle School this month as students explored everything from chicken wings to artisanal snowflakes in their classes. In this article, Jacqueline Mathey (7th and 8th grade social studies), Brenda Walter (7th and 8th grade science) and Dan Stafford (7th and 8th grade English) give us a glimpse inside their classrooms.
Implications of the Industrial Revolution
In Jacqueline’s social studies classroom students were learning about the many societal changes that came about thanks to the industrial revolution and the emergence of assembly line production. Through a hands-on experiment they compared the work of unspecialized workers to that of specialized (or artisan) workers, by creating paper snowflakes. 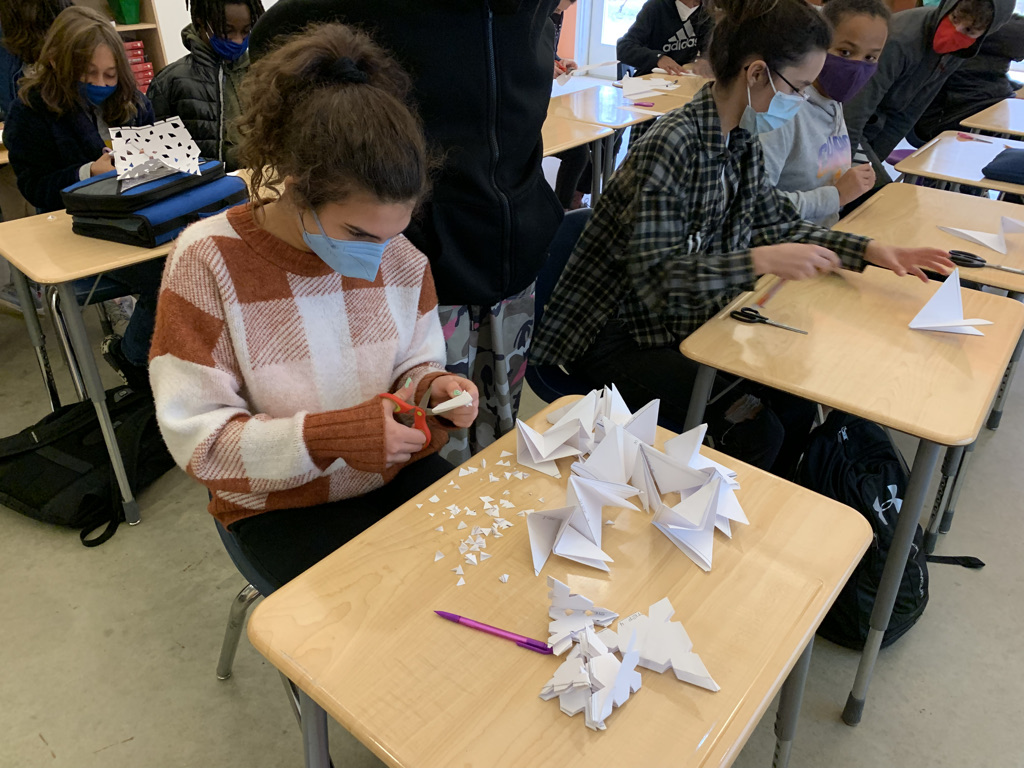 The students portraying “artisan” workers were given the following instructions: Your goal is simply to make the best snowflake you can! Be creative as there is no template to follow. Use whatever process you think is best and take as much time as you need.
The students portraying the unspecialized workers were given these instructions: Your goal is to make the MOST (and most perfect) snowflakes you can in the shortest amount of time.These workers were given a specific set of instructions to follow for each worker in an assembly line.
Both groups were given the same amount of time and set to work making their snowflakes. The assembly line workers also had a “manager” whose task was to make sure the snowflakes were manufactured quickly and identically. 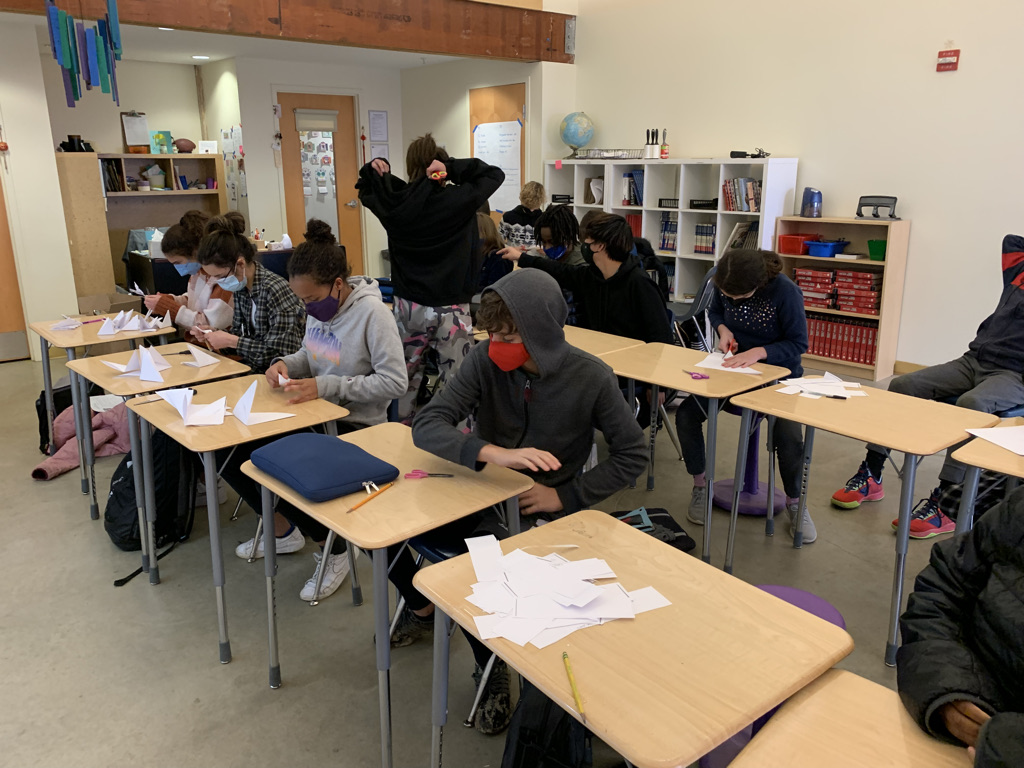 As the experiment unfolded many snowflakes were created but also some key learning takeaways emerged. “Students saw first hand the connection between efficiency and productivity but also how the worker experience was so different in the artisan versus assembly line context. After this activity they were able to reflect on how factories grew and grew into the dominant form of production we experience today, often at the expense of the worker. In our readings, we learned that immigration greatly increased during this period, and the abundance of labor meant that workers could be hired and fired with abandon. From here, our conversations will revolve around the robber baron class and protections put in place to protect laborers.” 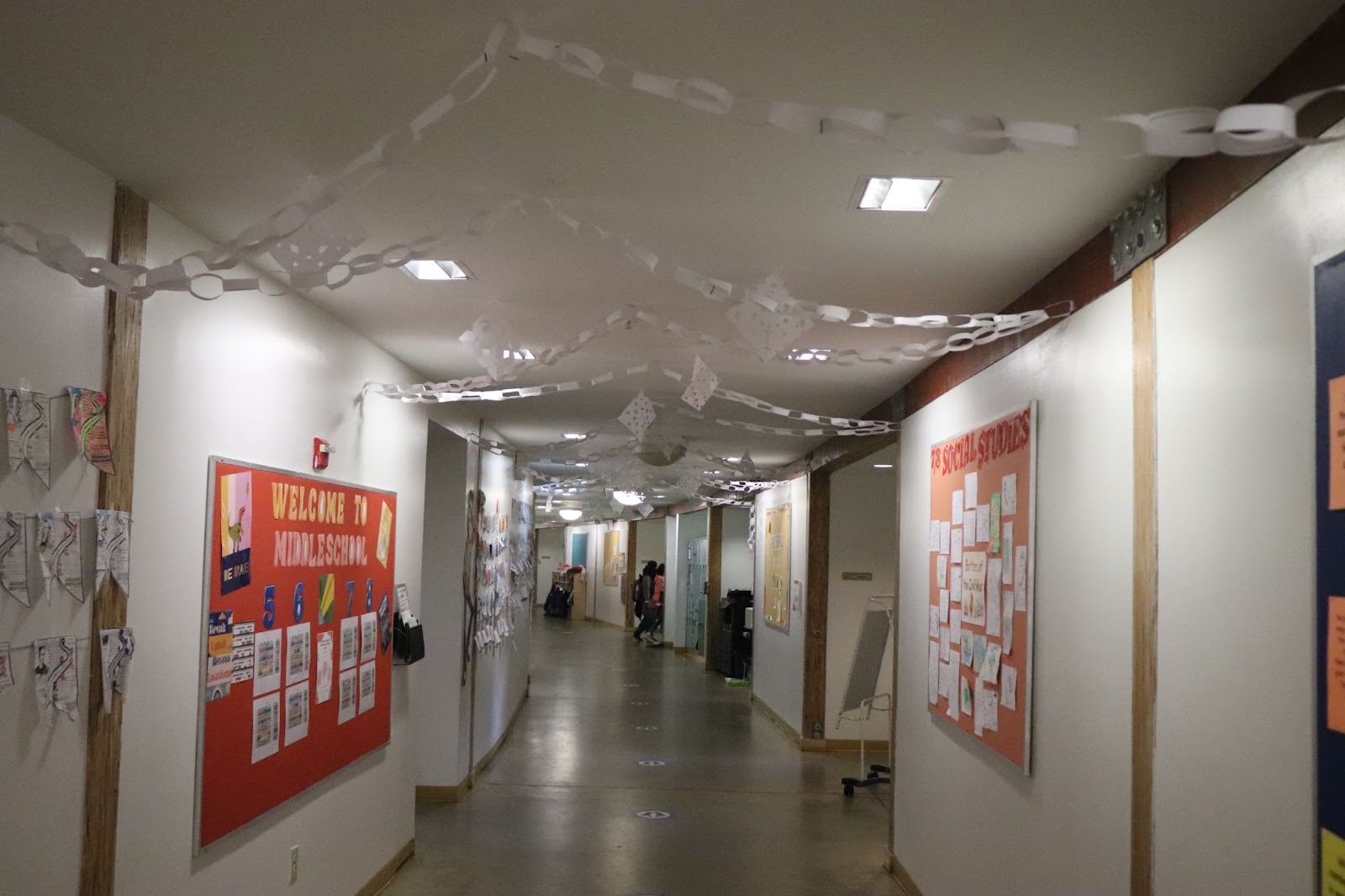 After the experiment there were a lot of snowflakes in Jacqueline’s room. The students put them to good use in decorating the Middle School hallway!
Two Different Kinds of Motion
Brenda’s 7th and 8th grade students studied two very different things this month but they both included elements of motion. 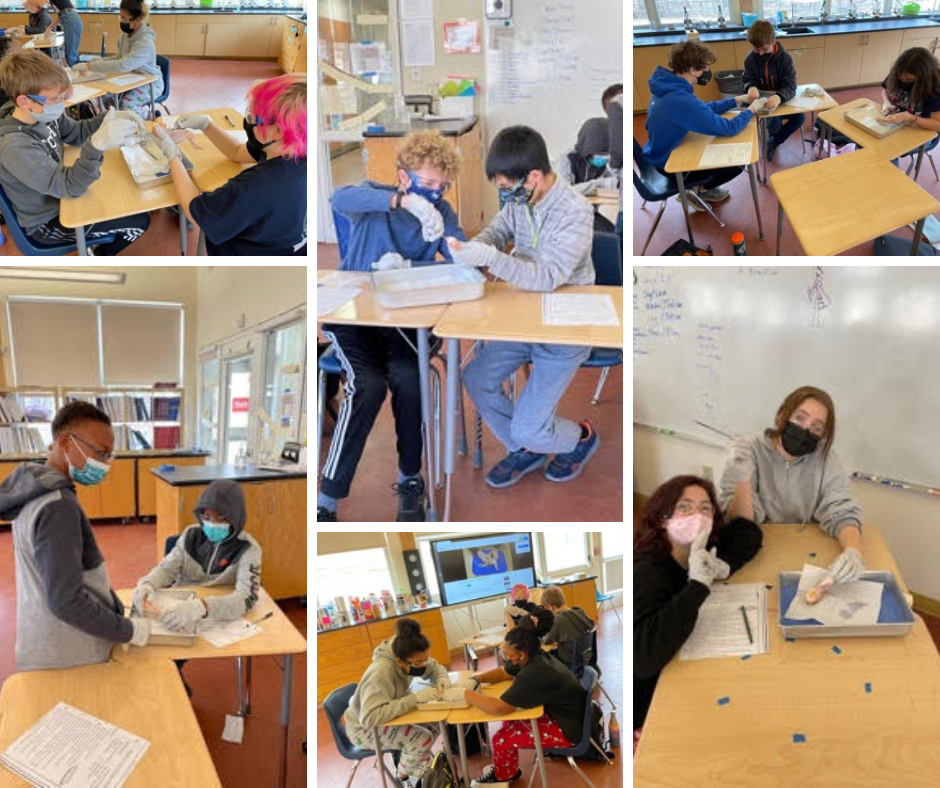 In 7th grade they just finished up a unit on the muscular and skeletal system which culminated in a chicken wing dissection.  As they poked and prodded at different parts of the wing they were able to see how muscles and tendons connect to the bones and how those connections lead to movement. 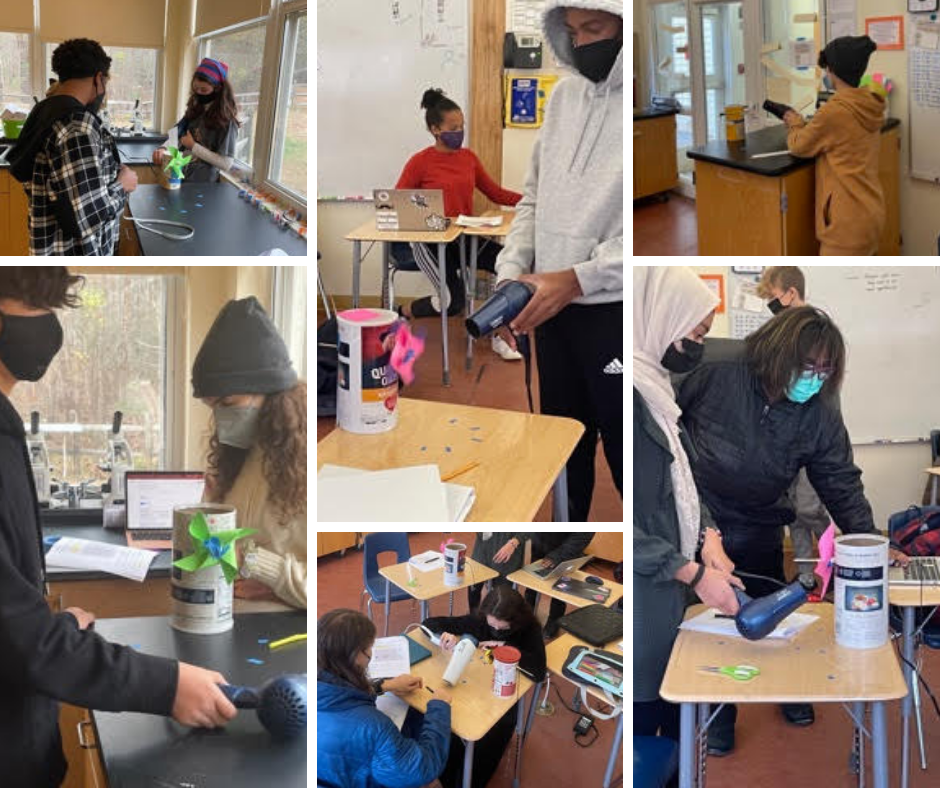 In 8th grade they did an interdisciplinary unit involving reading The Boy Who Harnessed the Wind by William Kamkwamba which is an autobiographical tale about a boy who learned how to build a windmill to save his community from famine. Students learned, like Kamkwamba did, about how to build a wind turbine and created mini windmills with oatmeal cans. They used the scientific method to collect, analyze, and communicate their findings.
Brenda explained, “it was such a fun and rewarding project for students. I think they are really proud of their work! I saw these concepts come alive for them in this hands-on way. We learn so much from doing, and in both of these units I saw students grasp concepts on a whole different level when they were able to actually touch and manipulate materials pertinent to what they were learning.”
A Raisin in the Sun
In Dan’s 8th grade classes, students were reading with their whole bodies as they explored scenes from Lorraine Hansberry’s A Raisin in the Sun. They noticed the connections between stage directions and emotions in a scene as they stood or sat, gestured or listened according to their part. In addition to acting out scenes from the text, the play is serving as a launchpad for discussion about housing discrimination, generational wealth, and what happens when people are blocked from reaching for their dreams. 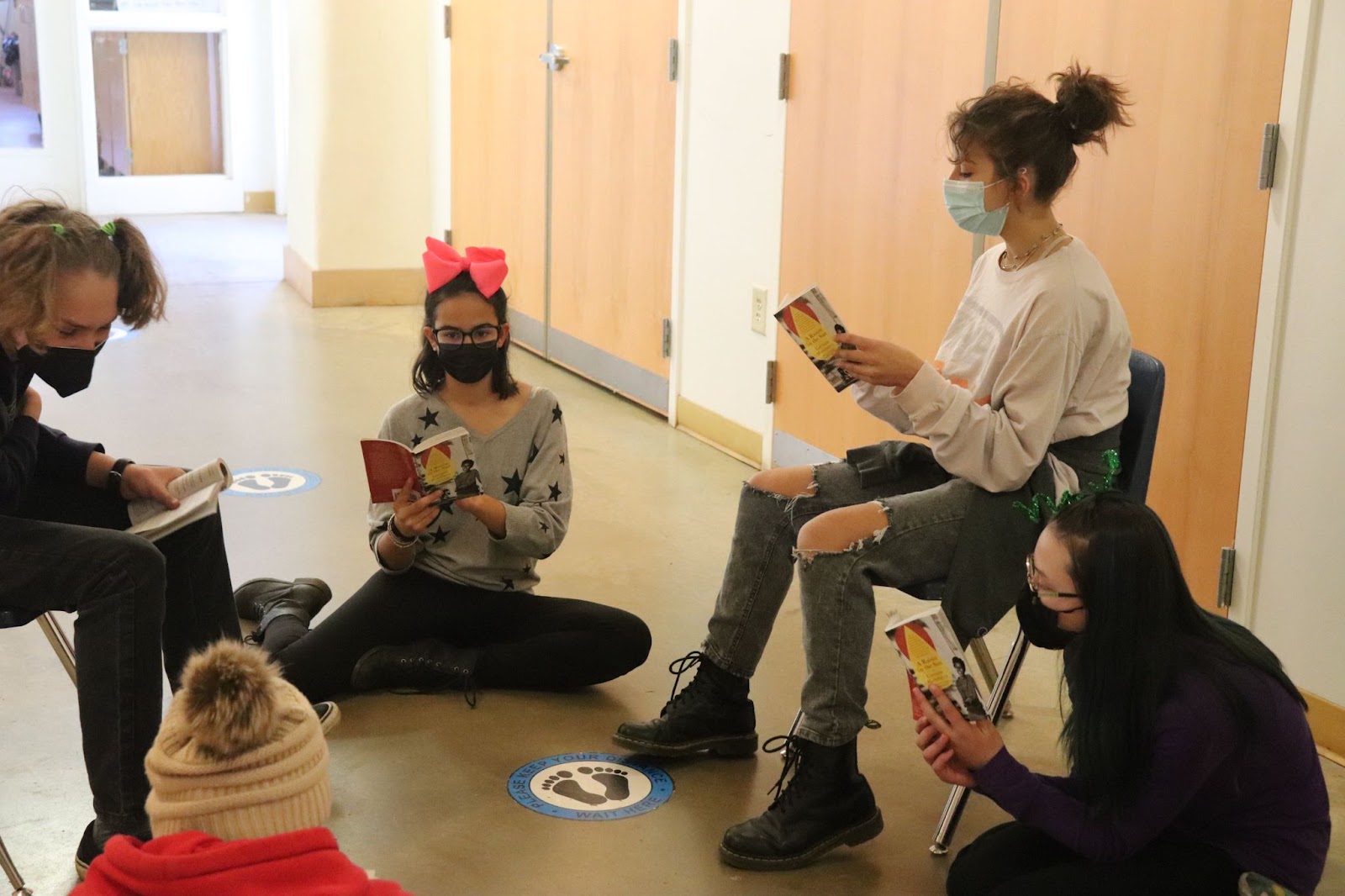 Dan explained that this text falls under the yearlong theme of “The Danger of  Single Story” - a phrase popularized by this TED talk by Chimamanda Ngozi Adichie which explores the danger in ascribing cultural understanding based on the reading of just one person’s story. Throughout this year students will read many different stories by a diverse array of authors in which characters grapple with tough decisions. 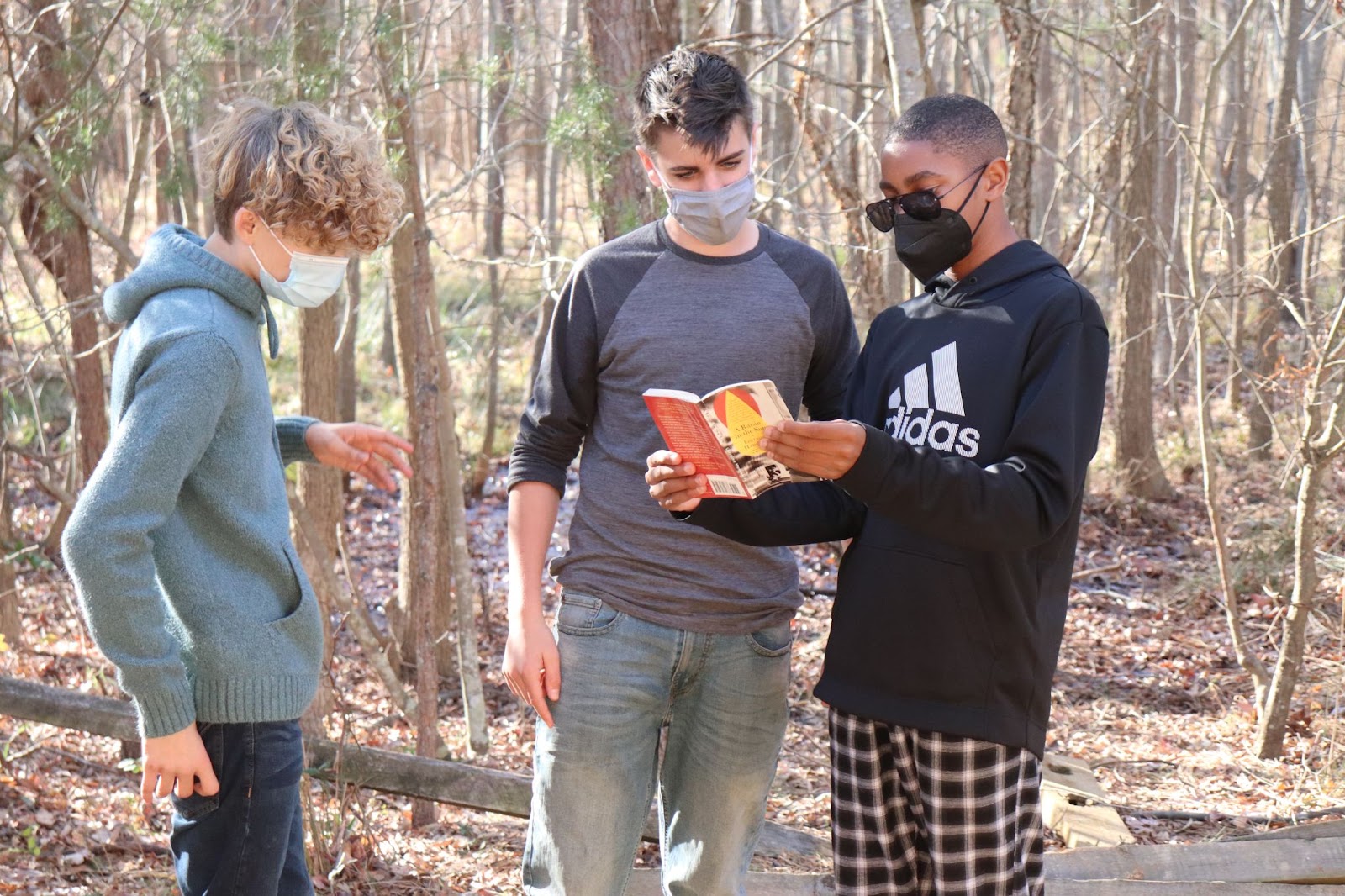