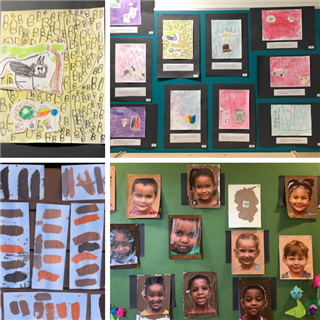 The Me You Cannot See

Delilah is brave around cicadas. Indra can speak Hindi. Sarai loves giraffes. Ellie likes purple. Kiran’s favorite food is gummy worms. Braxton’s favorite animal is a jaguar. When school started in September, all FCS Kindergarteners knew about each other was what they could see on the outside. But after a few months of sharing their likes and dislikes, adventures, and dreams a much fuller picture of their lives is emerging.
Kindergarten teachers Alexandra Whyte and Jennie Soon Condon began the year with a unit called, “The Me You Cannot See” which helped students to learn that there is so much more to a person than what we can take in with our eyes. Jennie explains, “I start the unit with a picture of an iceberg, first what is above the water and then what is below, and I ask the students to share what they see. They notice it’s so much bigger under the water. Then I make the connection with them, it’s kind of like us. When you walk by someone you see them but you just see the surface there’s so much more to a person than what you see.” Alexandra says the unit offers children the opportunity to begin to articulate “who they are to each other and to make the distinction between what you can see about me on the outside versus the inside. They discover that what is outside is not all of who I am. It’s just a teeny tiny part of who I am. The ‘me you cannot see’ is actually a very important part of who I am.” Throughout the unit, students read books, have discussions, and create pieces of writing and art that illustrate what they are learning about themselves, and each other.
Mixing Paint
As part of the unit, Alexandra adapted a lesson from the Pollyanna racial literacy curriculum the school has adopted in which students mix paint to create different skin tones.
“We had everyone start with orange, black, and white paint. They could decide if they wanted more black or white to mix with the orange and they created several different colors. Each time they mixed a color in, they added another line to a paint strip.” Then students observed the many colors each had created. In a subsequent lesson, they used what they’d learned about how the colors interacted to mix up a batch of paint in their own skin tone. They did this in response to a work of art by artist Angelica Dass called Humanae in which more than 4,000 people have had photographic portraits taken on backgrounds tinted to match their skin tones. Alexandra put a selection of these portraits up on the board and asked students what they knew about the people they saw. Which one is a soccer player? Which one is a grandfather? How do you know or not know? The students realized they knew nothing about these people beyond how they appeared. Next, using the paint they’d mixed, they created their own portraits in the style of Dass’s artwork, and then on a separate sheet of paper beneath each portrait they drew and wrote about something on their inside that a person wouldn’t know at first glance.
Alexandra said they realized, “it’s not about my skin color or how I look. You have to dig deeper to know me and appreciate me.” 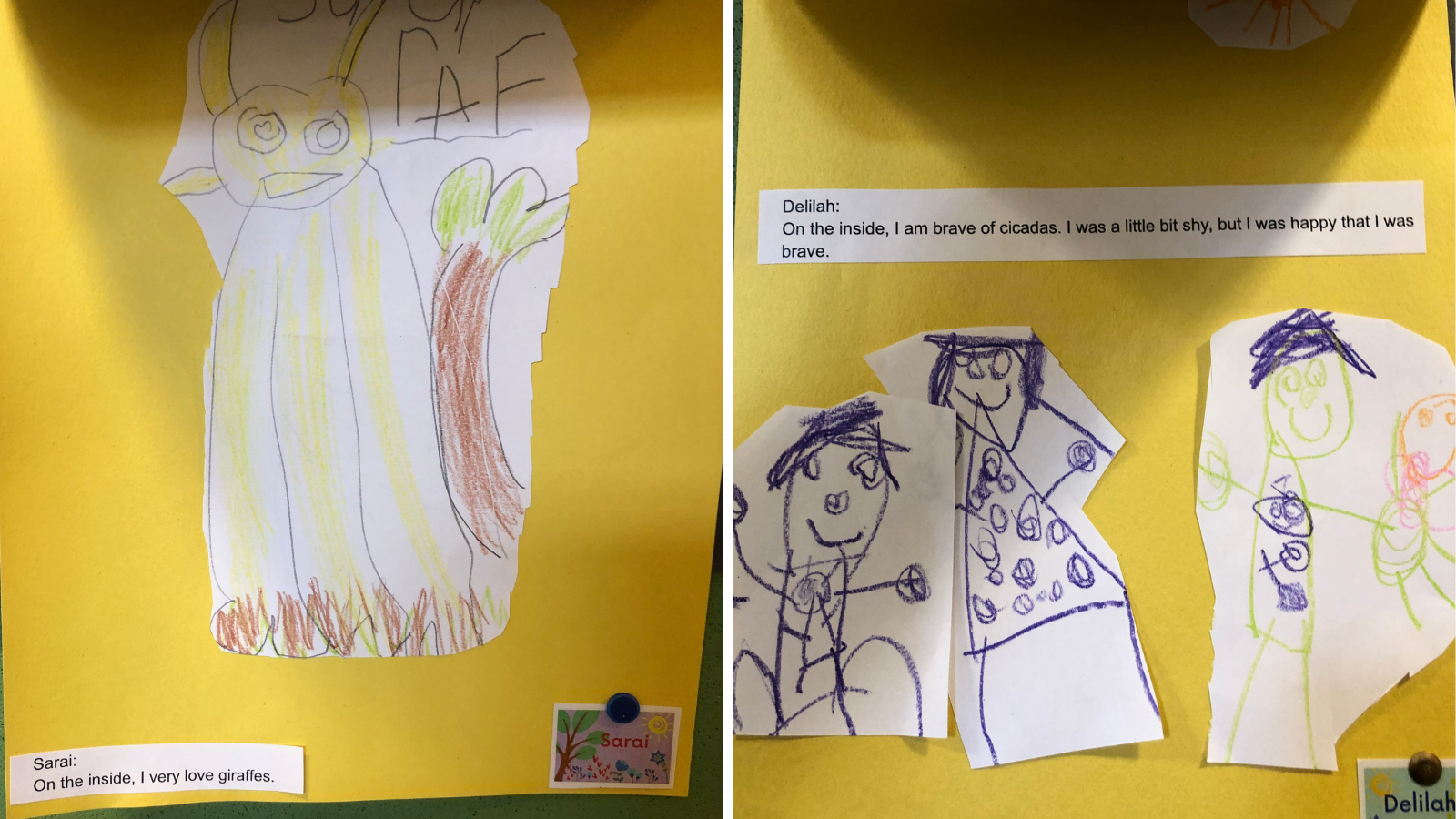 The Art of Conversation
Jennie’s students created portraits too, but they took a slightly different approach after the iceberg introduction. “I start a conversation with them saying, would you have known just by looking at me that I can speak one language well and one okay and that these two languages are English and Spanish? Some would assume I would speak some Asian language, but I explain that I was adopted and those are the two languages I speak but you wouldn’t have known that if we hadn’t gotten to know each other.” Then students begin sharing things that are similarly below the surface about themselves and Jennie uses this as an opportunity to teach them about the art of conversation. She and Jason model the back and forth of an engaged discussion. “It is a lesson in really listening to a person.” After students share with partners, they share what they learned with the class. “As we did it more, they got better at truly hearing what their partners were saying.”
That listening was evident after they created multimedia “portraits” featuring their favorite things. They turned the works into a game where viewers had to use the clues in the images and writing to guess who each piece represented. When the pieces were complete, students were excited to note that they could pick out the artists based on what they remembered them sharing with the class. 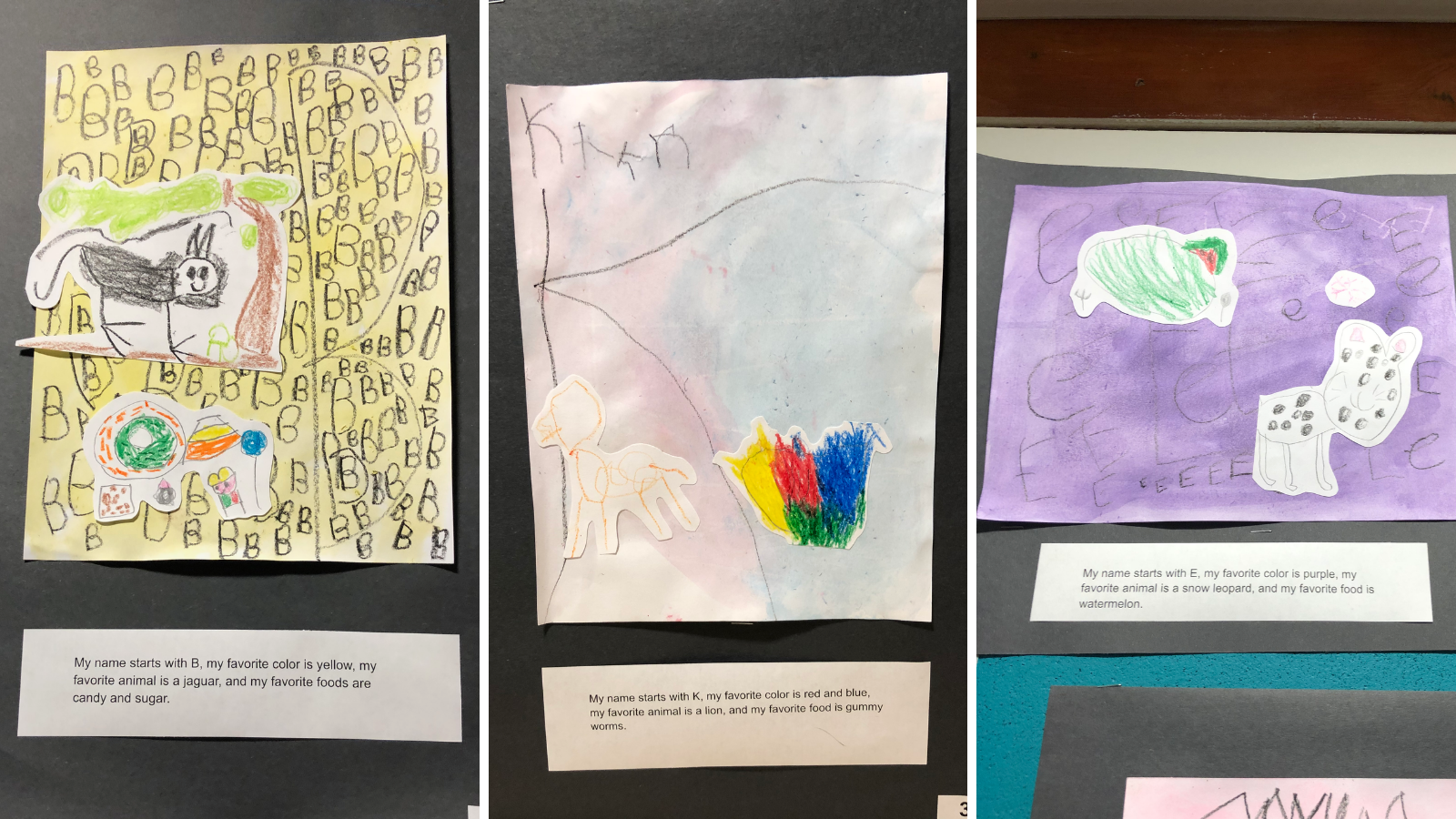 It was also evident that they were listening closely to their teacher. One day Jennie talked with them about flexibility and shared the story of how she quit ballet. When she was little she fell in love with a pair of red slippers (her favorite color) but could only get black or pink. She shared how her inflexibility in that situation meant she never got to be the dancer she might have wished to be. Later that day, without any prompting, several students left drawings on her desk depicting a little Jennie dancing in red ballet slippers. She was moved by their thoughtfulness.
“That kind of connection that comes when you take the time to get to know someone is what I want them to get from this unit. I want them to take the time to ask questions, to get to know people, to care.”
Back
Located in College Park, MD, Friends Community School is a progressive Quaker K-8 day school, founded on the belief that every child is a valued member of our community. We offer a challenging curriculum imbued with strong values of equality, integrity, community, environmental stewardship, simplicity and peaceful conflict resolution, rooted in our Quaker heritage.
Friends Community School
5901 Westchester Park Drive
College Park, Maryland 20740
301-441-2100