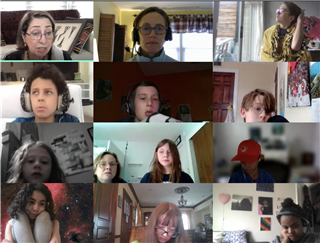 Students in Holly’s 5th-grade classes are studying immigration and reading the book Shooting Kabul by N. H. Senzai. It is a fictional story about what happens when twelve-year-old Fadi’s parents escape from Taliban-run Afghanistan and move the family to the United States in 2001. On Thursday they had the special opportunity to speak with Ilhan Cagri, someone who also escaped from Afghanistan, though she left in 1983.
Ilhan is the grandmother of FCS students Muhammad and Ibrahim Mokhtarzada and Jennah and Noorah Mokhtarzada. She shared her family's story of fleeing Soviet-controlled Afghanistan after bribing officials to let her board a plane with her children for a trip to India. Her husband had just been released from prison, where he had been held as an act of terrorism, and she had to leave everything that wouldn’t fit in a few small bags behind in her home in Kabul. “I have no pictures of my children when they were very young. I had to leave those too … look around you at all the things in your home, imagine that all you can take is what can fit in a small duffel bag and you will never see any of these things again.” Because Thursday was a virtual learning day for 5th-graders, the exercise of looking around their homes was very real.

In addition to sharing her journey, Ilhan also told students about the culture and community she left behind.
She showed students how tea would be shared from her beautiful samovar, and explained the importance of hospitality to Afghan culture. “Every time someone comes to your house you offer them tea... We consider guests to be a blessing.” This is still something she does here in the United States. Students were fascinated by this concept and questioned the parameters of such hospitality. Could random people just show up at your house and get tea? No. How about a friend visiting with a family member? Yes. How about people coming to fix something in your house? Yes, in Afghanistan, though she doesn’t tend to do this here. How about a thief? No.

In preparation for Ilhan’s visit, students found pictures online that depicted the Afghanistan they read about and shared them in an online album that Ilhan could view and respond to. She remarked with sadness on how many of the images depicted war and devastation - things that were true of, but did not tell the full story about, the country she had once called home. She noted that Afghanistan had been home to a university sought-after by people around the world, and the birthplace of windmills and tulips - things we don’t tend to think of when we picture the country now. One image showed the varied head coverings worn by Afghani women and Ilhan showed them how she would have worn a hijab out in public when she lived there. Ilhan’s story is one of many the class has learned to listen for during this unit. As part of their study, every 5th-grader interviewed someone with an immigration story.
One student shared a sentiment with Ilhan that received many head-nods. “You have a very interesting story.” Ilhan smiled and responded, “I’m a very curious person. I talk to people all the time and as you get older you’ll be so surprised to discover that everyone has an interesting story … and think about what brought YOU here. Look at the stories of your grandparents and great, great grandparents, there were wars and starvation. Keep going back and you’ll see how difficult it was and yet our relatives managed to stay alive because we’re still here. Whoever they were, they were pretty smart people. All of us must have had really resourceful ancestors that managed to stay alive in spite of all of the dangers. We should celebrate our ancestry because we’re here.”
Back
Located in College Park, MD, Friends Community School is a progressive Quaker K-8 day school, founded on the belief that every child is a valued member of our community. We offer a challenging curriculum imbued with strong values of equality, integrity, community, environmental stewardship, simplicity and peaceful conflict resolution, rooted in our Quaker heritage.
Friends Community School
5901 Westchester Park Drive
College Park, Maryland 20740
301-441-2100