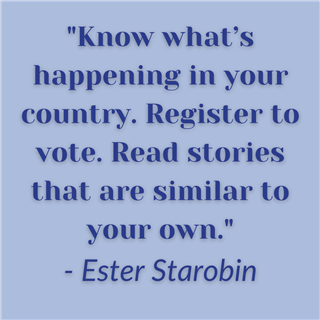 Learning from a Holocaust Survivor

Look around at people. Eat lunch with those who are sitting by themselves. Know what’s happening in your country. Register to vote. Read stories that are similar to your own. Listen to the narratives of those who’ve experienced genocide.

This is the advice that was peppered throughout a one-hour presentation to FCS 8th-graders by Ester Starobin, one of the 65 Holocaust survivors who volunteer at the United States Holocaust Memorial Museum in Washington, DC.
Commencing a unit on Holocaust literature, students in Jennie’s English Language Arts class were invited to listen to Ester field questions from a Museum docent about her Jewish family’s experience before, during and after World War II. Many of the questions centered around Ester’s early childhood and how, at the age of two, Ester’s parents sent her to Norwich, UK on the Kindertransport -- a rescue effort that brought Jewish children to Great Britain and placed them in foster homes (Ester’s placement in the home of a Christian family was organized by a Quaker woman, Doris Eddington). It was this sacrifice by Ester’s parents that saved her life, as they were killed shortly thereafter at the Auschwitz concentration camp.

In 1947, Ester was sent to the U.S. to live in the unstable home of an aunt and uncle in Washington, DC. Although she was reunited with her four older siblings, she described feeling lonely and different from other kids. She had “suddenly become Jewish” after growing up Christian, and while her morals and values remained the same, everything had changed. Ester shared the story of sitting in a high school German language class and the teacher professing his love of the country, stating, “Germany is the best place on Earth.”

Esther’s experiences have taught her that it is imperative to educate our youth. “There are patterns in modern-day society...and so many genocides are still happening,” she stated. When asked what the takeaway from Ester’s story is and how it aligns with the values taught at FCS, 8th-grader Isaac Witte responded, “That she was peaceful...Esther could have taken a different, negative approach, but instead, she took what she went through and peacefully turned it into a learning experience for children and others. I think that is really impressive and it shows the Quaker value of peace, which I have learned at FCS.”
Back
Located in College Park, MD, Friends Community School is a progressive Quaker K-8 day school, founded on the belief that every child is a valued member of our community. We offer a challenging curriculum imbued with strong values of equality, integrity, community, environmental stewardship, simplicity and peaceful conflict resolution, rooted in our Quaker heritage.
Friends Community School
5901 Westchester Park Drive
College Park, Maryland 20740
301-441-2100