Light the Way: For today and the future

The Light the Way Endowment Campaign is a $1.5 million campaign to grow the FCS Endowment. When we meet the $1.5 million goal, the Endowment will generate significant revenue, independent from tuition, to help FCS fund 3 initiatives:
1. Faculty compensation, ensuring we attract and retain talented teachers;
2. Financial aid, keeping the school accessible to area families and supporting our economically diverse community;
3. Professional resources, giving faculty the additional tools and skills to challenge and support every student.

You are invited to become a donor to the FCS Endowment. Yours will be an ongoing legacy of an FCS eduction for future generations. Gifts may be directed to any of these 6 FCS Endowment Funds:


The Light the Way Campaign also offers the opportunity to establish a named endowment fund with a gift of $30,000 or more.

Thank you for your support of FCS.

Please contact the Advancement office for details and any questions about giving/pledge options. 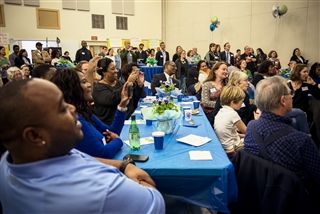 More than 150 FCS parents, alumni families and friends of the school gathered in Nov 2017 to celebrate the launch of the Light the Way Campaign for FCS.

Students shared their reflections about FCS, the Clerks of the Campaign, parents Earl Adams, Jr, Tamara Devieux-Adams, and Albert Morales, described the aspects of FCS that inspired their passionate support of the school, and Larry Clements announced that the school had already raised $710,000 in Endowment commitments. Teachers Alexandra Whyte (K) and Jennie Claiborne (8th) spoke about their journeys as teachers. The Spirit of FCS video (written and produced by Alumna Aziza Afzal, with videography and editing by alumni parents Bruce Dixon and Ray Lane) premiered. Parent and chef Jay Keller provided gourmet hors d'oeuvres served by 7th and 8th graders. John Scroggins and Derian Douglas took beautiful photos of the evening.

Thank you to the Board Advancement Committee, the entire Board of Trustees, teachers, parents, students, Adelphi Friends Meeting, and friends of the school who made it a special evening for everyone.

How does FCS Light the Way? So many ways!
Show us your way on Instagram. Every photo at #FCSLightTheWay earns $1 from an anonymous donor for the endowment campaign, up to $500.

Download this Endowment Giving Form if you prefer to mail in your contribution to the School.

FCS is a 501(c)(3) non-profit organization.
Gifts to the school are fully eligible for tax deduction.