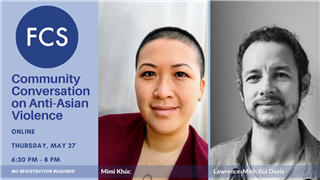 On Thursday, May 27 FCS parents joined us for an evening conversation on where anti-Asian racism comes from, how it shapes our experiences, and what we as a community can do about it. The event was led by FCS parents Mimi Khúc (professor of Asian American studies and disability studies) and Lawrence-Minh Bùi Davis (curator of Asian American studies at the Smithsonian Asian Pacific American Center). You can view the video from this conversation here.
Mimi and Lawrence began with an overview of immigration history in the United States and laws that impacted who could come into the country and when. Much of these laws were created to meet U.S. labor needs while balanced against American racist xenophobia. Asian immigrants have been selectively allowed and then excluded at various points depending on U.S. desires and fears. Mimi and Lawrence then talked about the devastating impact of racial narratives like “the model minority” and “the forever foreigner” for people of Asian descent. Lawrence explained that these ideas are based in white supremacy. The model minority was “coined as a wedge to prevent solidarity among communities of color and to create false divides between them.” Mimi also explained that these narratives shape Asian American identities by telling Asian Americans what they should aspire to be and what they need to distance themselves from in order to belong in the U.S.
Mimi and Lawrence pointed out how the various wars the United States was part of abroad fomented anti-Asian sentiments within the country that didn’t simply dissolve when the conflicts were over.
All of these factors contribute to anti-Asian violence today, Mimi and Lawrence explained, but this history and context is not something most of us have ever learned about in school. One of the most important things we can do to combat this violence is to become better educated about the systems and structures that enable racism to persist in our country so we can find ways to dismantle them.
Lawrence noted that anti-racist work is by its very nature intersectional. “The anti-racist work that we have to commit ourselves to . . . has to be about how do we end anti-blackness, which affects all of us? How do we think about indigenous rights, which affect all of us? How can we organize in ways that support all of our BIPOC communities and think about liberation for all of them?”
Mimi shared that talking about racism with our children is part of that process. She shared that she’s teaching her child to look critically at representation in movies, books, and TV shows through the same lens she uses with her college students. She asks:
What are the stories that are being told about Asian people/cultures/etc. here?
How do those stories fit into larger stories that have been told about certain people?
Who benefits from the story that is being told? Who might be harmed?
“I think it’s great to be learning together and to be honest with kids about the gaps that we have in our own knowledge. It helps show our kids that learning is lifelong and a process. But it also helps show them to be critical of education and to always ask more of their education.”
At the close of the discussion, FCS parent Taylor Wiley wrote in the chat: “Thank you so much for opening this space for this conversation. I would love to see this conversation revisited continuously throughout the school year and always include strategies to bring back to our kids.”
Mimi and Lawrence shared several resources that we’ve listed below. Huge thanks to both of them for sharing their time and expertise with the FCS community.